Dining Out: Take One

Since we met we've gone out to eat at least a few (okay, several) times a week -- breakfasts, lunches, dinners, and snacks. There have been times that we've tried, especially since having a child, to limit ourselves to eating at home 75% of the time. This was the first week that we ate all but 3 lunches at home, and it was challenging. We cooked every night (and slow-cooked two mornings). Tonight, we had an un-missable birthday at a fine dining restaurant, and they were so accommodating. Having worked in food & beverage for too many years to admit, we were embarrassed to be "those diners," but in the end, it was great that we'd called ahead to see if it would be possible to have a no dairy no soy no wheat no sugar no legume no you name it dinner. It was. If anything, the only challenge was the amount we ate -- a four course meal was still four courses. The legumes, well -- no one understands that yet. Not even us. They aren't pictured
Post a Comment
Read more 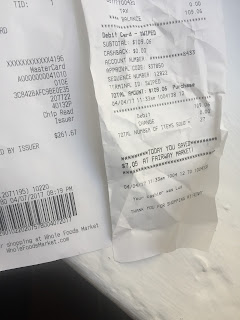 It Starts With Food

send me a message!